Applications for the car industry:

Measurement of regulated and non-regulated compounds in engine emissions. 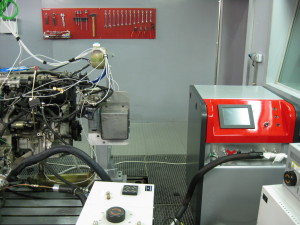 Regulation of chemical pollutants in engine emissions is becoming tougher year after year, requiring car manufacturers to implement new analysis solutions. A good example is the Euro 6 standard, entered into force in Europe on September 2014, which regulates newly type-approved cars.

In order to meet these application needs, analyzers should therefore be able to detect a wide range of compounds. BTrap offers an innovative solution for on-line multi-compounds detection.

BTrap benefits for analysis of chemical pollutants in automotive emissions:

The real-time measurement of regulated and non-regulated pollutants during a standardized European Driving Cycle, designed to imitate the conditions encountered on European roads in a reproducible way, is an important information for engine settings. Tests have been performed with  BTrap on the following cycles:

Urea injection in a catalytic reactor placed on the path of the exhaust gas upstream of the particle filter resuts in strong decrease of nitrogen oxides (NOx) emitted by diesel engines. Continuous monitoring of ammonia, nitrogen oxides (NO, NO2) and by-products of the catalytic degradation reaction (such as Isocyanic acid HNCO) is essential for setting up those filters.

Characterization of pollutants present on the particulate phase emitted by a Diesel engine.

The adsorption of chemical pollutants, such as Polycyclic Aromatic Hydrocarbons (PAHs), on the particulate phase emitted by a diesel engine is currently measured by liquid chromatography-UV detector through solvent extraction methods. Those methods are time consuming and require some precautions for solvent use and disposal. Thermal desorption from the filters set up on the engine emission sampling line enables a direct measurement of PAHs but also lighter VOCs trapped on the particles, without sample preparation. The TDflash is set up right on the Gas Chromatograph (GC) injector, providing a representative measurement of all the compounds trapped by the filters, especially the heavier molecules such as PAHs.